[COLUMNIST] Becoming the citadel of corruption, paving the way to a failed state

With the worry over corruption being normalised in Malaysia, a natural question arises of whether Malaysia will become a failed state.

Dr Rais Hussin
With the worry over corruption being normalised in Malaysia, a natural question arises of whether Malaysia will become a failed state. - REUTERS
THE avalanche of corruption scandals unearthed in Malaysia involving billions of people’s money making corruption nearly a way of life that plagued all strata of institutions and society and can pave the pathway to the destruction of the nation and people.

Hearing of billions of ringgit being stolen whether it is 1MDB, SRC or LCS or many more other abbreviations, in an ordinary course of business, should have sent shock waves to all in Malaysia. However, did it really send shock waves, or the identity politics of race and religion can once again subdue the shock waves?

With the worry over corruption being normalised in Malaysia, a natural question arises of whether Malaysia will become a failed state.

In this context, it is an interesting exercise to juxtapose Malaysia’s socio-economic-political life over the last couple of decades with the “template” for poverty and becoming a failed state described in one of the world’s bestselling books --- “Why Nations Fail” by MIT professor of economics Daron Acemoglu and Harvard political scientist James A. Robinson.

The authors, both recognised as leading specialists in contemporary political economy and development economics, suggested a novel explanation behind the vicious cycles of poverty and misery in which some nations (not all) find themselves based on a synthesis of about 16 years of original research analysing historical patterns over about 10 thousand years and with a geographical spread over all five continents.

Their original theoretical framework is underpinned by multiple complex political economy theories such as the model of franchise expansion, game theory, the models of kleptocracy and oligarchic society etc. --- all hidden behind the simple and intuitive language of the book.

Despite being, perhaps fairly, criticised for missing the multi-faceted nature of economic development and ignoring the supra-national involvement, the scientists still captured a significant predictor of a national failure.

To summarise the entire book in a very concise way: "Institutions decide everything". Institutions are the formal and informal societal rules of how they function economically, politically, and socially.

Over a long period (centuries, and sometimes even millennia), nations accumulate insignificant changes in the level of their social organisation complexity. However, a large-scale change in the external (to the nation) environment occurs at some historical junctions. Some societies are able not only to accept these challenges but to adapt and integrate them into their societal organisation via “inclusive institutions” born at this moment. However, for other nations, this same historical junction begets the strengthening of pre-existing “extractive institutions” (Figure 1). 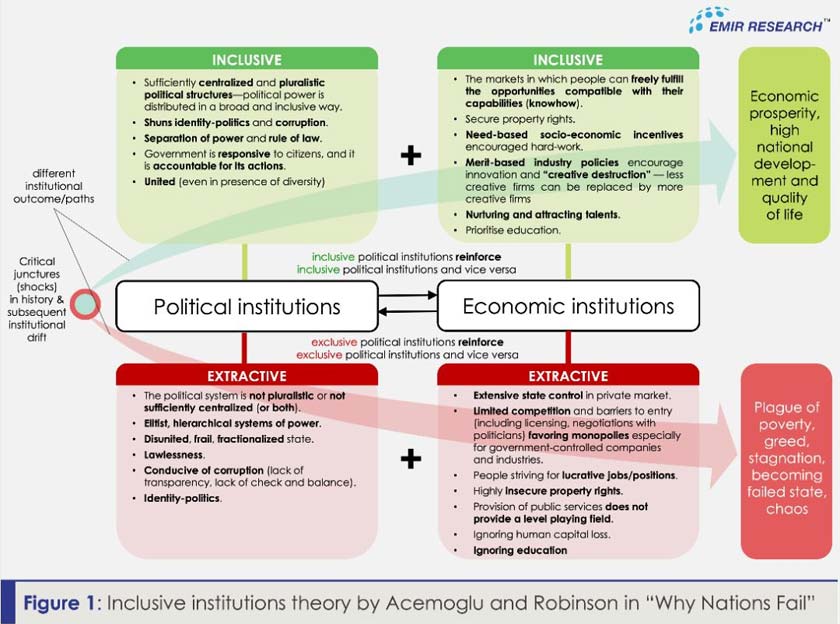 The authors are particular in their choice of words. The opposite of “inclusive institutions” they call not just “exclusive”, but “extractive” to re-emphasise not only their nature but their very reason while advancing another subtle thesis of the book — the failure of a nation is never by a genuine mistake of the powers to be. The mismanagement is always on purpose!

Extractive economic institutions dynamics such as extensive state control, entry barriers, regulations limiting competition and favouring monopolies, individuals choosing lucrative occupations, creating a non-level playing field etc. are there for a reason of creating an unequal society --- where solely the “elite and the politically powerful actors” benefit by extracting resources from the nation as a whole.

And extractive economic institutions depend on pre-existing extractive political institutions which are lacking pluralism (recognition and affirmation of diversity within a political body, which is seen to permit the peaceful coexistence of different interests, convictions, and lifestyles) or sufficient centralisation (or both) and therefore carrying uncontested power to install the extractive economic mechanisms in the first place.

Vice-versa, the extractive political institutions don’t combine well with the inclusive economic institutions made to unlock the process called by the great economist Schumpeter a “creative destruction”. During this process, old technologies are replaced by new ones, new sectors of the economy attract resources at the expense of old ones, new companies crowd out previously recognised top performers, new technologies make old equipment and skills unnecessary, and upward class transition creates new leaders who can challenge status quo. Thus, inclusive institutions and the economic growth they spur produce both winners and losers among economic and political players alike. Therefore, the fear of this creative destruction often underlies resistance to creating inclusive economic and political institutions.

Thus, inclusive and extractive institutions trigger complex feedback loops that can be either positive (“virtuous circle”) or negative (“vicious circle”).

Extractive institutions can also produce economic growth, but it will be unsustainable and short-lived. Recall the statistics presented by EMIR Research in its earlier writings (see Figure 2) and note that structural break happening mainly around the early 2000s. 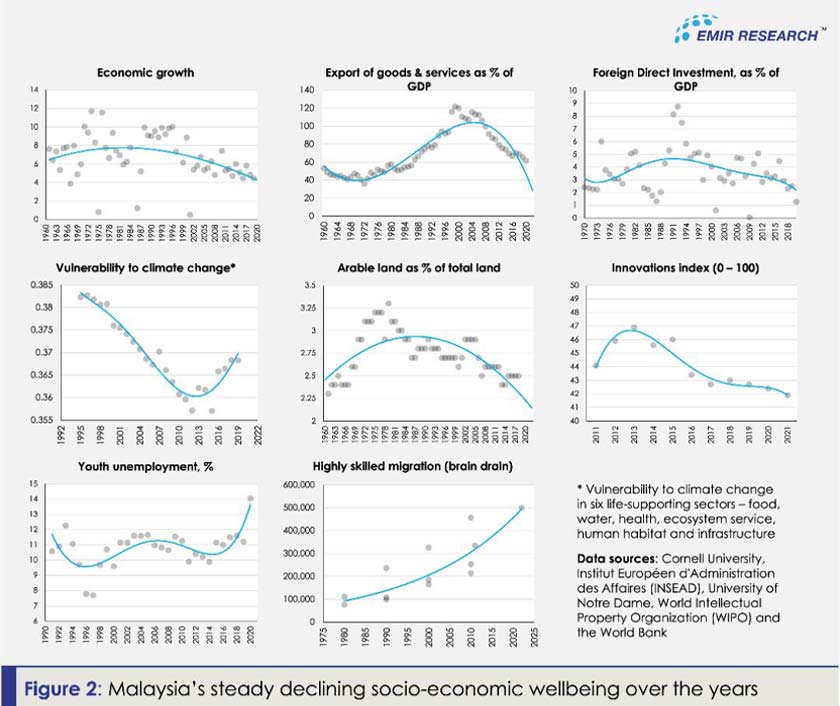 However, growth under inclusive institutions allows for “creative destruction” and thus supports technological progress and innovation — the sole driver of sustainable economic growth and national prosperity.

Therefore, to be a conceptually powerful and responsible citizen, one must sometimes take the time to read such works as “Why Nations Fail”. If an average Malaysian is to flip through the pages of this book (or at least have the patience to study Figure 1 in this article carefully), they would certainly recognise the starkly familiar patterns.

What out of extractive institutions checklist does Malaysia not have?

In fact, over the last couple of years (mainly pandemic years because crisis always helps to write off management flops), our nation has advanced so far in its “institutional drift” towards becoming even more extractive that it prompted Malaysia’s profound scholar and thinker, Professor Emeritus Tan Sri Dr. M. Kamal Hassan, who in his entire life of 79 years, never spoke of politics, to write a book “Corruption and Hypocrisy in Malay Muslim Politics” (“Korupsi dan Kemunafikan dalam Politik Melayu” is its version in Bahasa Melayu).

“In this small and humble work of mine, I am contributing – by the grace of Allah SWT – my thoughts towards the ultimate goal of putting an end to the cancer of political corruption, the pandemic of hypocrisy and the resulting shameful disunity that has plagued the Malay-Muslim community” – says the author as being unable to keep quiet while witnessing the unprecedented moral decay in the arena of politics and governance of the nation, which brought about disastrous setbacks when the nation is at the point of survival for many.

Highlighting the disunity as an outcome of identity politics (absolutely shameless exploitation of ethnicity and religion), the scholar is addressing the gap insufficiently addressed even by Acemoglu and Robinson in their “Why Nations Fail” — what political processes lead to the creation and preservation of extractive institutions?

To secure their political survival, extractive governments have no choice but to play the trump card of identity politics to break and disunite the nation. This is because they probably know the probabilistic tendency: the less dispersed the distribution of citizens’ political preferences, the more the politicians must be concerned about their welfare since the share of supporters is more responsive to the policy choice.

The EMIR Research poll held amidst the pandemic (Q4 2020) has shown that the Malay community is the most dispersed regarding their political choice (Figure 3).

By the same token, extractive governments are not interested in curbing poverty and inequality because citizens' political preferences would be largely dispersed if inequality among citizens is large.

Not surprising that the devastating and destructive impact of the decades of extractive institutions reign on the nation and specifically on Malay and rural communities (the main grip hold of the ruling political elite) is no longer possible to hide (for statistical evidence, refer to “Ruthless colonisation Mat Kilau could not even imagine” from 25 July 2022).

But remember, mismanagement of the country is never accidental — it is on purpose! And while citizens close one eye on this, the billions of extracted resources accumulate. The total amount that can be reconstructed from the publicly reported figures (Figure 4) is only the very tip of an iceberg. 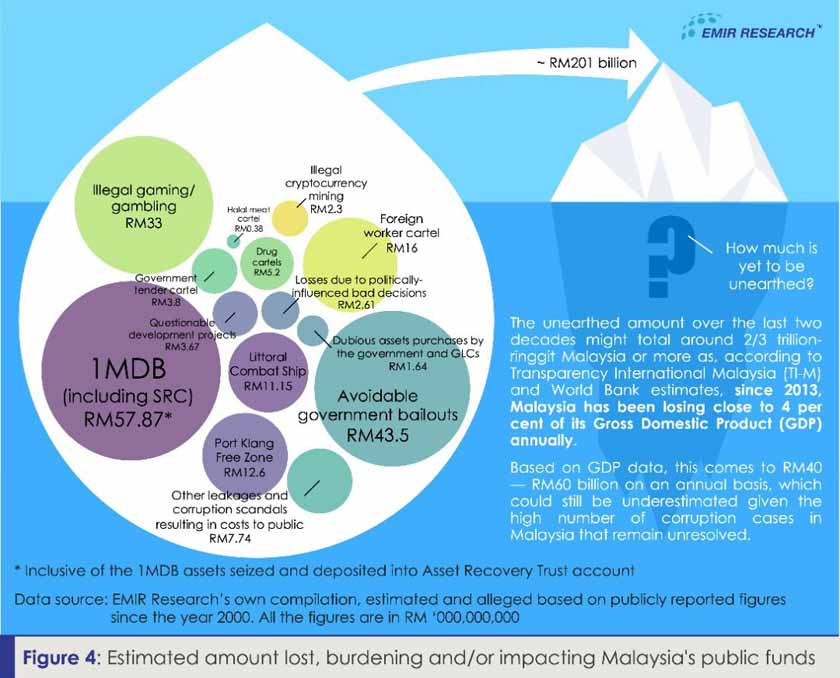 Therefore in the forthcoming GE15, Malaysia’s ability to take a different institutional path is critically dependent on the current opposition’s ability to form a formidable turn-around team composed of individuals not tainted by the support of extractive political institutions.

At the same time, rakyat needs to remember about extractive institutions and how they intentionally keep the nation in an endless loop of misery. The devastating impact that the pandemic, coupled with the recent global geo-political problems, had on Malaysia’s socio-economic-political life, unlike other nations, should help to keep this memory fresh.

If, during normal times, the deliberate mismanagement of the country can be masked and rakyat can be deceived by “narratives management” and creation of pure visibility (mimicking) of management, then the times of crisis highlight all the flaws better than MRI.

Could the latest two convictions with the fines charged of RM210 million and 12 years imprisonment for Dato Sri Najib Razak,  and RM970 million and 10 years imprisonment for Datin Sri Rosmah Mansor (the highest fine imposed under MACC Act in Malaysia’s history) be construed as the beginning of a greater war against the corruption and extractive institutions in Malaysia?

Dr Rais Hussin is the CEO of EMIR Research, an independent think tank focused on strategic policy recommendations based on rigorous research.

** The views and opinions expressed in this article are those of the author(s) and do not necessarily reflect the position of Astro AWANI.
#Mat Kilau#Rosmah Mansor#Najib Razak#GE14#EMIR Research#Rais Hussin