[COLUMNIST] Southeast Asia at risk to cross-straits war over Taiwan

China's invasion of Taiwan will send shockwaves throughout the Asia/Indo-Pacific region.

Astro Awani
China's invasion of Taiwan will send shockwaves throughout the Asia/Indo-Pacific region. - REUTERS
“UKRAINE today, Taiwan tomorrow” was the phrase that had been echoing and reverberating over Taiwanese social media when Russia invaded Ukraine early this year.

With Nancy Pelosi’s congressional trip to Taiwan recently and China’s incensed reaction, social media are abuzz again with worries about the possibility of an outbreak of conflict by accident. Provocative actions by the People’s Liberation Army (PLA) Air Force via intrusion of Taiwan’s air defence identification zone (ADIZ) and the scrambling of the island’s fighter jets for “interception” (i.e., escort by mirroring the flight path of the enemy, e.g., by trailing from behind) in response could lead to war if either side “pulls the trigger”.

The purpose of an ADIZ is to enable a country – like the Republic of China/ROC (on Taiwan) which claims the whole of the mainland – to take pre-emptive strike if necessary.

It’s meant to extend the “strategic depth”, i.e., buffer zone, of Taiwan – between the enemy’s base (exterior line – longer) which is just across the straits with the industrial regions and heartlands and not least, centre of gravity (i.e., the site of political leadership based in the provisional capital of Taipei), of the island republic.

It’s a kind of defence-in-depth strategy that aims to absorb enemy blow away from the island whilst “slowing” down the (momentum of the) enemy’s movement of invasion.

This is complemented and supplemented by the porcupine strategy in the form of sea defence – where naval mines have been laid by divers and, more recently, by minelayer ships.

All of this under the aim of “semi-attrition” – phase 1.

Ultimately, Taiwan’s entire defence is grounded in the overall concept of the island as an “unsinkable (aircraft) carrier” – which should be the node upon which all the defensive strategies turn.

China has also launched precision missile strikes into the Taiwan Straits – foreshadowing the extensive and unrelenting projectile (in lieu of artillery) barrage that will precede a seaborne and airborne invasion (of PLA forces).

China’s air and sea invasion would be accompanied by a blockade. This will have grave implications for the freedom of movement (navigational and air) coming from the South China Sea (SCS) and, by extension, Southeast Asia.

Circumventing the blockade requires the ROC to conserve its naval strength and capacity by concentrating its destroyers, frigates, and submarines behind the “unsinkable “aircraft” carrier” (i.e., on the eastern side of the island) in a purely defensive position.

The aim is to deny (and hopefully deter) a seaborne invasion in corresponding direction (if at all) or engage in littoral combat (backed by surface to air missiles on land, etc.) with the PLA Navy for the purpose of “punching a hole” to create a gap and thereby break the blockade. Submarines will be deployed for counter-attacks.

The ultimate aim of this/Taiwan’s version of anti-access/area-denial (A2AD) is to prolong the invasion and occupation (which has no parallel with Russia’s conflict with Ukraine) timeline – where the eastern half of the island will be critical – so that China’s hope for a quick and decisive end will be dashed.

This would be analogous to the Pusan Perimeter designated by the Far East Command (Fecomm) of the US together with the UN forces during the Korean War (1950-1951).

Within the eastern “half”, ROC Army’s positions would be concentrated in defending interior lines, whereas the ROC Air Force would engage in air guerrilla warfare by using the Central Mountain Range as natural “cover” (supported by missiles/projectiles positioned on ridges, etc. as air cover). The new (temporary) ADIZ will be coterminous with this second half of the island and the littoral zone.

Pockets of resistance will hold out in the western theatre – engaging in guerrilla warfare (underground resistance – also with subterranean tunnels, caverns, etc.).

China’s invasion of Taiwan will come with a heavy price tag – not only politically but economically.

It’d be self-defeating as the disruption caused to one of the Indo-Pacific’s major strategic and primary waterways and sea lane communications routes would be where the costs outweigh the benefits. China’s own economy could be crippled.

Needless to say, China's invasion of Taiwan will send shockwaves throughout the Asia/Indo-Pacific region.

As pointed out by the Australian Strategic and Policy Institute (Aspi), the “major ports of Shanghai, Dalian, Tianjin and others are dependent on passage through waters near Taiwan”. The Straits of Taiwan “… is the major conduit for shipping from North Asia … to the rest of the world, and it’s also the most direct route from South China to the US” (“A blockade of Taiwan would cripple China’s economy”, The Strategist, August 8, 2022).

An invasion and blockade would also cause mayhem to the global supply chain of microchips.
Taiwan is responsible for 63% of the global contracts for microchip production and a staggering 92% of the most advanced semiconductor (10 nanometres and below) manufacturing capacity, according to a report by Boston Consulting and the Semiconductor Industry Association.

China is itself the destination for about half of Taiwan’s exports of integrated circuits. Taiwan-sourced chips are central to China’s exports of electronic goods. The loss of chips from Taiwan would crush China’s industries.

And China accounts for 60% of world semiconductor demand, according to an October 2020 report from the Congressional Research Service. More than 90% of semiconductors used there are imported or manufactured locally by foreign suppliers (see “Taiwan chip industry emerges as battlefront in US-China showdown”, Reuters, December 27, 2021).

Furthermore, “[semiconductor] foundries are located on the narrow plain along Taiwan’s west coast facing China, some 130 kilometres away at the nearest point. Most are close to so-called red beaches, considered by military strategists as likely landing sites for a Chinese invasion”.

As alluded, the SCS which directly connects with the Straits of Taiwan will see an inevitable spill-over from the conflict – not only economically but in terms of security implications too.

The SCS is a contested are too – among several southeast Asian countries with China and Taiwan as overlapping claimants.

China claims about 90% of total area in the SCS based on the” nine-dash line”. As with the People’s Republic of China (PRC), the ROC (on Taiwan) similarly claims almost all of the SCS (as can be seen in Figure 1).

Presumably, the invasion of Taiwan would also “entail” China (as rival claimant) seizing the Taiping/Itu Aba island under Taiwanese control and administration.

Now, in turn this would mean that SCS would experience a full-blown conflict for the first time.

By extension, this would have critical ramifications on the freedom of navigation that’s dependent on de-militarisation and de-escalation in the SCS and of which the US has been at the forefront in promoting via its Free and Open Indo-Pacific (FOIP) paradigm.

Whilst the US might stay/sit out of China’s invasion of Taiwan (as a purely “internal”      matter), it might be “hard-pressed” to do so when it comes to the SCS.

Moreover, any conflict in the SCS which by default further militarises the SCS or increases China’s visibility could provide the “pretext” for the US to intervene. 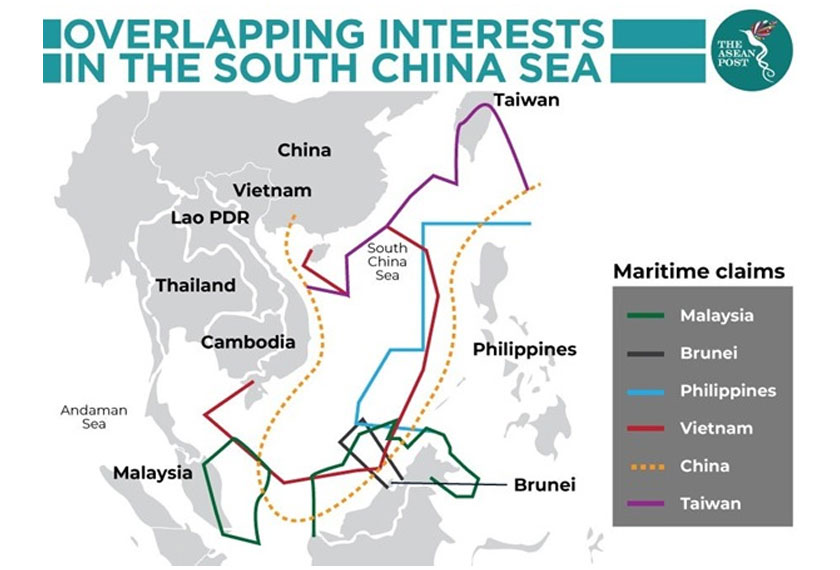 After all, post-Trump/under Biden, the US is “back” with its Indo-Pacific Economic Framework (IPEF). A conflict in the SCS with immense implications for the Indo-Pacific supply-chains, production network linkages, shipping routes, and other geo-economic dynamics might force the hand of the US in this regard.

Now, since the Philippines, another overlapping claimant has traditionally close military ties with the US as embodied by the Mutual Defense Treaty (1951), this will also give the US another justification to get involved.

Taiping/Itu Aba island is claimed by the Philippines too.

More than that, the island also represents the northern gateway of the SCS into Taiwan (“southern flank”) and the rest of East Asia and eastern half of the Pacific Rim.

Meaning, China’s attack on Taiping/Itu Aba island will further disrupt the Indo-Pacific supply-chain route/passageway – prompting the US together with the Philippines to take action.

In turn, this could lead to an all-out confrontation precipitated by one side wanting to enforce a corridor for the continuation of a free and open passageway in the SCS with the other interpreting it as an act of belligerence.

Be that as it may, any conflict in the SCS would mean the US simply can’t afford not to intervene this time.

Otherwise, it’d then also render the implicit or tacit containment policy towards China – in concert with the Philippines, Vietnam, and Singapore – ineffective. And, by extension, this puts a question mark over the whole security arrangements, in varying degrees, respectively. Both Taiwan and the Philippines are part of the “first island chains” for the Asia-Pacific geo-strategy of the US (please refer to Figure 2). Whilst the US may have to “tolerate” the breach in respect of Taiwan, it’d certainly not do so when it comes to the Philippines and, simultaneously, the SCS.

Then again, the economic consequences for Southeast Asia/Asean would be severe.
If full-blown war were to erupt in the SCS, other member-countries/-states with overlapping claims could be compelled to take part (together with Australia and India), however token the participation, which could just lead as well to what’s World War 3.

All of this, of course, is merely conjecture at present.
But it’s of vital urgency, therefore, for Asean member-states with overlapping claims to sit down with China (and vice-versa) and hold talks on joint-development (JD).

EMIR Research has been calling for the revival of the JD concept first mooted by the venerable Deng Xiaoping (see “Joint development of the South China Sea: The way forward to avoid conflict”, January 16, 2020).

Whilst JD might not definitively resolve the thorny of issue of overlapping claims, it’d would at least serve to minimise the potential for conflict in the SCS.


Jason Loh and Nik Nurdiana Zulkifli are part of the research team of EMIR Research, an independent think tank focused on strategic policy recommendations based on rigorous research.