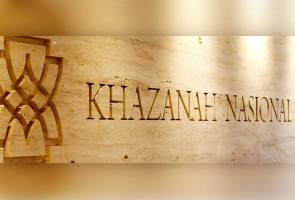 Equally, there is the delicious prospect of Amok actually having a hand at the shaping of Khazanah 3.0 considering that he knows Khazanah like the back of his hands. - Filepic
IT is an incalculable loss for the current crop of school students who will never learn the value of Latin adopted in their school motto.

Not only does it inculcate a sense of exclusive camaraderie, it could well tease out the thirst for inquisition in the quest to acquire knowledge.

Concomitantly; a war chant to scare off the enemy can equally come in handy when faced with the onslaught of slings and arrows raining down in the field of battle.

Let Manliness Come Through Wisdom sounds rather less imposing than its Latin equivalent – Fiat Sapientia Virtus – the motto drummed into the psyche of all boarders at the Malay College Kuala Kangsar. This after all is the foreign phrase learnt the moment a new crop of bright-eyed boys step into their double-decker bunks at the beginning of an unforgettable journey away from the warm bosom of family.

The Bung Wak chant can be heard in the heat of sporting battle on its playing fields, with cheering supporters from the sidelines egging on their fellows summoning every drop of energy to beat back the enemy’s advance. For Tan Sri Azman Mokhtar, leaving the position of Khazanah MD on Tuesday (31 July, 2018) could well rank as one of those dates etched in the memory as clearly as the day he, as a 13-year-old boy – as did 119 other boarders at Prep School back in 1974.

Both rallying motto and tribal war cry remains etched indelibly in the heart of those who went through this shared communal rites of passage. It lives long in the memory and will, from time to time come flooding back.

While it may not yet act as a proven panacea for life’s myriad pains, the power to restore the memory of yore could well be a salve to ease any sore.

In the current climate of boardroom movements, there can be no casualty bigger than that of Tan Sri Azman – whose initials A-M-O-K remains etched in the collective memory of many, and not only amongst his most loyal acolytes.

This comes as a cathartic political cleansing brought about by the aftermath of GE14 has been followed by collateral clearing of the C-suite.

It was back in January, Thursday 18, 2018 at this year’s annual Khazanah performance that Azman shared with the media a bit of crystal-ball gazing.

He announced that fresh from the 10-year GLC transformation program, the sovereign wealth fund was rolling out its Transformation 2.0 described as an initiative aimed at raising the performance and valuing creation. Its focus would be on the adoption of innovation, disruption and entrepreneurship grandly given the title TIDE.

Just under five months later, the general election intervened and just over two months following that sea change in the Malaysian political landscape, Transformation 2.0 could well be subsumed by Khazanah 3.0.

One can safely assume the truism is shared by Amok, the ex-(or more uncharitably axed, to his detractors); managing director of Khazanah Nasional.

Wise to the ways of the world, broad in outlook, successful in corporate life, service to nation – yet, but yet; he fell from the lofty altar of national service, not entirely of his own making nor choosing.

The whys and wherefores of his exit and that of his fellow corporate cohorts – before and following him – at Khazanah and elsewhere is being seen as a wholesale detoxification of the Malaysian C-suite.

To those acting as chorus line, the bloodletting was much-anticipated comeuppance. There were those who looked to the heavens, invoking divine providence – “…there but for the grace of God, go I”.

Some were fortuitously blessed, less endowed as it were with any measure of vocal ability to hold a tune. They passed up on the chance make up the numbers, horrified perhaps by being relegated to junior duties flicking a pair of maracas in the now (in)famous BN Boy Band. Thus, they were able to live down the stigma of singing the blues – in every sense of the word.

Others chose to leave before the shove, much in tune if not anticipation, of future culls to come with the government’s declared desire to `clear the decks’.

Perhaps no casualty prior to this was more widely speculated if not lamented, than that of Tan Sri Abdul Wahid Omar at Permodalan Nasional Berhad (PNB). He was plain AWO (Abdul Wahid Omar) to the media during his days as merchant banker; DAWO at TM and Maybank (upon the award of a Datukship) and later elevated to TAWO when in government having been elevated to a Tan Sriship.

Always charming and blessed with the ability to fend off persistent media badgering with oodles of patience and fatherly indulgence, he was a class act who still, had to go.

Now it is Amok’s turn who never needlessly sought out the media to push any agenda. He kept his professional distance, even amongst members of the fourth estate who enjoy the privilege of being no more than a WhatsApp chat connection away. This brotherly bond endures to this day, fostered all those years spent during their formative years at boarding school.

Requests to interview were fended off with polite rebuffs rather than curt dismissal; and whenever he relented, showed plenty of forbearance. Amok is always ready with a quotable quote, witty quip – his easy pally nature putting subordinates and at times ill-prepared inquisitors, at ease.

This indeed was the public face of Amok, especially when he became more available for media prodding when the annual Khazanah results became an annual event in the quest for transparency.

Both Amok and TAWO came from boarding school environments that hugely shaped their outlook later in their private and corporate life.

Both responded to a sense of duty to serve the system that gave them the `leg-up’ in life trough education. They chose the finance and accountancy route which gave them access, opportunity and ability to be a player in corporate life. In the process, they got unwittingly drawned ever so gingerly into the periphery of administration, government and dare I say it - politics.

Both fell by the same sharp sword, that slayed mercilessly, regardless of the whys and wherefores of such ignominy.

To be sure, retirement short of his 58th birthday allows Amok more time to himself, his family and his friends. He no doubt will be an even more regular congregant within the calm oasis of the neighbourhood surau conveniently located right at the front door of his Kajang home.

With a CFA to his name, Islamic credentials in hand, buzzing with social and development ideals, Amok certainly will not be lacking in offers to keep his fertile mind occupied. Indeed the world is his oyster as to where or what he does next.

In the struggle to make sense of his departure, there’s unfettered speculation that he might be well suited to continue to serve - in government!

Equally, there is the delicious prospect of Amok actually having a hand at the shaping of Khazanah 3.0 – considering that he knows Khazanah like the back of his hands.

But those possibilities we should leave to a reading of the tea leaves – after all, didn’t a certain individual by the name of Arul Kanda became highly touted as the person most likely to take over from Amok as Khazanah’s next MD?


A revised version of this article can be viewed at www.awanireview.com