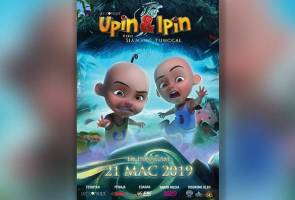 Les Copaque Production prides itself on producing extraordinary stories that resonate with people from all walks of life.
ON 4 September 2019, Les’ Copaque Production Sdn. Bhd. received news that our latest 3D animation feature film was announced as the winner of the Best Feature Category at the Montreal International Animation Film Festival 2019 (ANIMAZE 2019).

This is one of the accolades awarded during ANIMAZE 2019, as a recognition to production companies for the excellence and expertise demonstrated through the animation content that they have produced. Hosted in Montreal of Canada, ANIMAZE is an international animation film festival which has been around since 2013. It is attended by production companies, film makers, as well as content creators from across the globe, including from countries like the USA, Canada, France, and Mexico.

Due to the prestige of ANIMAZE, Les’ Copaque Production Sdn. Bhd. decided to partake in the festival by registering our latest hit 3D animation feature film “Upin & Ipin: The Lone Gibbon Kris”, as a candidate for the Best Feature Category ANIMAZE 2019. Before being announced as a finalist and eventually the winner of the Best Feature Category of ANIMAZE 2019, “Upin & Ipin: The Lone Gibbon Kris”, our highest-grossing animated feature film to date, had to compete against many other animated feature films that were submitted from all over the world.

Hence, emerging as the winner for this category during ANIMAZE 2019 is a testament that “Upin & Ipin: The Lone Gibbon Kris” exhibits international standards when it comes to the film’s intriguing story line, high-quality animation and majestic music.

It is worth noting that special recognition was given to the film’s script. Les’ Copaque Production Sdn. Bhd. prides itself on producing extraordinary stories that resonate with people from all walks of life regardless of age, race, and culture.

Realising how rich Malaysia is with its own folklores, we seized the opportunity to highlight them in the eyes of the world by elevating the beloved characters and giving them more depth as they interact with Upin and Ipin.

With all the folklores available in Malaysia, it was quite a challenge choosing which ones to include in “Upin & Ipin: The Lone Gibbon Kris”. But storytelling is an art, and we knew that compressing too many elements in about 100 minutes is a recipe for disaster.

Thus, we decided to pare down and let a few characters go when refining the story. The mystical kris, one of the most important elements in the film, is the catalyst for the whole story. Hence, it is chosen to be included in the title of the film itself, tying up the whole package neatly.

It is an honour to be chosen as the winner for the Best Feature Category of ANIMAZE 2019 as this proves that Les’ Copaque Production Sdn. Bhd. is indeed a force to be reckoned with within the global 3D animation production industry.

In the future, we intend to produce more intellectual properties and content that are not only loved by the fans, but are also award-winning, just like “Upin & Ipin: The Lone Gibbon Kris”.