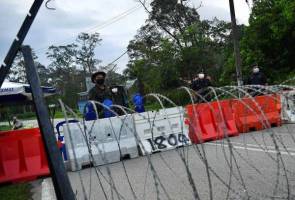 Hulu Langat residents hope the authorities allow one (family representative) to go out and buy daily essentials at this time.
HULU LANGAT: "I'm worried my baby's milk supply is running out."

A father, Azizul Awang, 32, lamented this when he was forced to stay home following the enforcement of the Enhanced Movement Control Order (EMCO) in the Batu 21 to Batu 24 area hare as of midnight on Sunday.

Although the government guarantees that food will be delivered to the area, as the head of the family, he said the basic needs of his children remains a priority. "I have placed orders online for milk and baby diapers, only to find out yesterday that the government has tightened control in my area.

“So, all roads are blocked and (residents and outsiders) cannot get in or get out. We have to stay home until April 13,” he told Astro AWANI today. It was clear from Azizul's voice that he was worried about his child’s milk supply, besides all the information provided to the residents during the first day of the EMCO was still unclear.

“I hope (the authorities) in charge of the control post can allow one (family representative) to go out and buy daily essentials at this time.

"Besides that, they must provide us more information as we are very much in the dark on a lot of things,” he added.

Meanwhile, another resident of Batu 23, Kampung Sungai Lui, Shaharizal Bahari, 43, said he has only been referring to a WhatsApp group for the latest developments including the distribution of basic goods.

“So far, I could see that the villagers are cooperating by staying at home.

“We have also been told we will be offered help but so far (as at 12 noon today), they (the Social Welfare Department) have not dealt with us. Perhaps they are still making the necessary arrangements.

“All I am worried about are unexpected situations, for example if our cooking gas runs out and we can’t get immediate help on this,” he added.

Another resident, Farizuan Abdul Hamid, 25, hoped the relevant parties could expedite the provision of daily essentials to prevent locals from running out of stock.

“For me and my family, the things that we have bought may last us for the next two or three days.

“Beyond that I am counting on the relevant government department to provide us food supply,” he said.