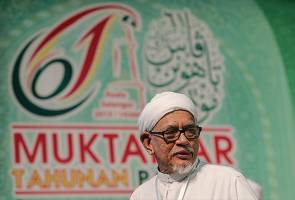 PAS president Datuk Seri Abdul Hadi Awang said PR is not dead and the DAP had no right to make the announcement on PR's dissolution.
KUALA LUMPUR: It's like having still living together, is the take by analysts on the developments in the opposition Pakatan Rakyat (Pakatan) coalition.

They viewed the statement by the Selangor Menteri Besar that there is no basis for the dissolution of the State Assembly in the Pakatan-ruled state as as more motivated by political survival. On Thursday, Menteri Besar Mohamed Azmin Ali had requested all parties not to drag the Selangor palace in the Pakatan's political crisis following the breakdown in ties between DAP and PAS who together with PKR make up Pakatan.

Political analyst Assoc Prof Dr Zaid Ahmad said if Azmin had made the decision to dissolve the assembly, it would be suicidal as his powers would likely be compromised. "Surely Azmin would want to maintain PKR's powers in Selangor and an election would not be the best option," the Dean of the Human Ecology Faculty, Universiti Putra Malaysia told Bernama, Friday.

Sharing the same view, political analyst Md Shukri Shuib stated that residents in the developed state now need to be more aware of the various major issues involving the opposition as the state government.

"In less than two crises have occurred and raised all sorts of issues that trouble the people.

"This should be a lesson to people not to vote for a fragile government. It could be seen from the beginning that the Pakatan was a brittle coalition and was expected to end up like this," said Md Shukri, who is also a Senior Lecturer of Politics and International Affairs at Universiti Utara Malaysia.

On Thursday, former PAS information chief Datuk Mahfuz Omar had suggested that the Selangor State Assembly be dissolved if Azmin cannot a choice between PAS or DAP as its partner under his administration.

Meanwhile, Selangor DAP chairman Tony Pua said that he does not rule out the possibility that the Selangor State Assembly will be dissolved following the turmoil that has occurred in the Opposition alliance.

PAS president Datuk Seri Abdul Hadi Awang said PR is not dead and the DAP had no right to make the announcement on PR's dissolution and cynically said that DAP did not understand the meaning of , causing it to act in a hasty manner.