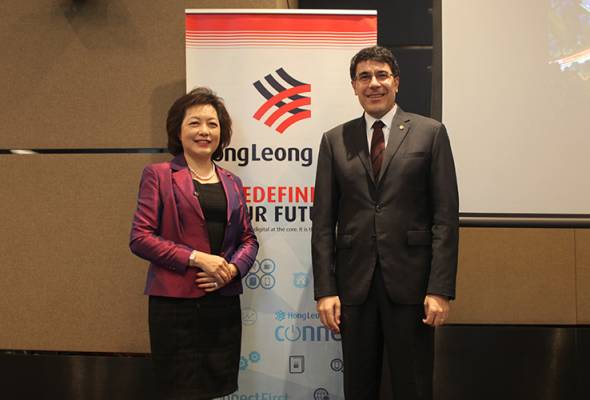 "If the momentum continues, so far it looks quite good, thus we should do better than 5% (loan growth for FY19)," Hong Leong Bank Group Managing Director and CEO Domenic Fuda said here today at a media briefing.

“Hong Leong Bank continues to maintain a resilient performance for Q2FY19 and H1FY19 amidst continuing soft business sentiments and intensifying deposit competition. We achieved a net profit after tax of RM1,394 million for the first half, growing 5.5% y-o-y compared to the same period last year. The result was mainly driven by a healthy expansion in loan book despite lingering challenges in the operating environment, improving asset quality as well as solid contribution from our associates” - Domenic Fuda, Group Managing Director and Chief Executive Officer of HLB commented

“Despite a challenging business environment, we are pleased to record a steady first half financial result from our core businesses. The Group continues to show strong key balance sheet and liquidity risk metrics. We have a clear and focused business and digital strategy, where we will continue to execute diligently to build long-term sustainable value for our shareholders” - Hong Leong Financial Group’s President & Chief Executive Officer, Mr Tan Kong Khoon.

Commercial Banking
• HLB’s profit after tax grew RM72.1 million or 5.5% y-o-y to RM1,394.2 million. The result was mainly driven by a healthy expansion in its loan books, improving asset quality metrics as well as solid contributions from its associates.

• Non-interest income for 1HFY19 grew by 7.9% y-o-y to RM674.9 million, recording a higher non-interest income ratio of 28.2%. This is due to stable contributions from fee income, improved foreign exchange gains and gains from the divestment of a joint venture.

• Cost-to-income ratio slightly increased to 43.3% in 1HFY19, but it was still at the lower end of the industry range. The Bank reinvests much of its cost saving initiatives and productivity gains into its digital programs and IT infrastructure.

Residential mortgages grew ahead of industry at 8.8% y-o-y to RM64.3 billion, supported by a healthy loan pipeline, whilst domestic loans to business enterprises expanded by 9.9% y-o-y to RM 38.5 billion.

• Asset quality continued to be strong, with its Gross Impaired Loans Ratio improving further to 0.8% as at 31 December 2018; one of the strongest asset quality positions in the industry.

• Loan-to-deposit ratio remained among the lowest in the industry at 81.0%. The Bank’s Liquidity Coverage ratio stood at 117.8% as at 31 December 2018, well above regulatory requirements.

• HLA Holdings Sdn Bhd, HLFG's insurance division, recorded a pretax profit of RM140.9 million in 1HFY19, a decrease of RM11.6 million or -7.6% y-o-y. The decrease in profit was mainly due to lower contributions from HLA and HLIA of RM5.6 million and RM5.4 million respectively arising from lower premiums and equity market volatilities.

• HLA’s management expense ratio was 6.1% in 1HFY19, remaining among the lowest in the industry.

• The focus remains on growing and improving the quality of HLA’s premium base, increasing profitability drivers as well as growth across multiple distribution channels.