UPSR results in 2016 sent shock waves throughout the nation. So what went wrong, and what can we learn from this?

Datin Noor Azimah Abdul Rahim
Photo: Astro AWANI / SHAHIR OMAR
It was not just parents and their 12 year old children who were devastated when the UPSR (Ujian Penilaian Sekolah Rendah) results were released but their teachers too.

School halls and courtyards were described as eerie morgues and zombie-like funeral homes as results were announced last Thursday.


It was as if a national disaster had struck the country and immediate help was not forthcoming.

MUST READ: Decision on scrapping UPSR to be decided next year - Mahdzir
Parents, students and teachers felt cheated as result slips failed completely to reflect the immense effort put in the whole year and more. Teachers were up in arms over the unexpected outcome.

While our children would take home millions of As every year, globally we were unashamedly among the bottom third of the spectrum, even below Vietnam.

We vowed that by 2025 we will be in the top third bracket among the participating countries but drastic steps had to be taken.


This meant adopting more critical thinking and problem solving questions over time, the ‘how’ and ‘why’, and which was subsequently given the name ‘higher order thinking skills’ or HOTS.

The parents are aware of HOTS, realise and are grateful for UPSR to be aligned with TIMSS and PISA. This will gradually remove the dependence on memorisation and rote learning and eventually bode well at upper secondary and especially tertiary level.

The teachers too see the long term benefit and are conscientiously working hard towards that goal.

So what went wrong?

This was the first cohort of KSSR which began in 2011 starting with Primary One.

While this happens at every syllabus change this time it was abnormally chaotic.

All parties realise that education is evolving and hard knocks are inevitable.

But these knocks can be cushioned if the education ministry representing teachers and the examination syndicate had a better working relationship.

Official detailed information should have been made clear and shared between each other in order that teachers are fully informed.


Grey areas existed and teachers were unsure as to what was expected of them for knowledge to have been delivered with accuracy and students to have been prepped as best they could have been.

Teachers felt that they were left in the dark and short changed as instructions were a blur.

They felt there was little co-operation among respective departments that appeared to work in silos. It was only after the results were announced that teachers now discover what constitutes an A, a B etc and whether a D or an E is a fail.

It appears that it may have been a moving goalpost after all.

The lesson to be learnt here and not to be repeated is that teachers need to know what is expected of them.

In future, with a clear benchmark, marking and grading systems in mind teachers will be able to inform parents who have to be made to understand how students can apply the knowledge gained and therefore obtain marks accordingly.

‘How’ and ‘why’ questions require thinking which can be difficult but if done often and soon enough the practice will benefit students in the long run.


On the bright side, it is a level playing field for all students concerned.

MUST READ: Unhappy UPSR candidates can appeal for paper review

Those who endeavour to proceed to residential, international or selected schools will continue to do so while the majority move on to their neighbourhood ones.

The greater worry that is around the corner is, will the UPSR this time be a mirror image of what will be foreseen with the SPM (Sijil Pelajaran Malaysia) results due in March 2017. 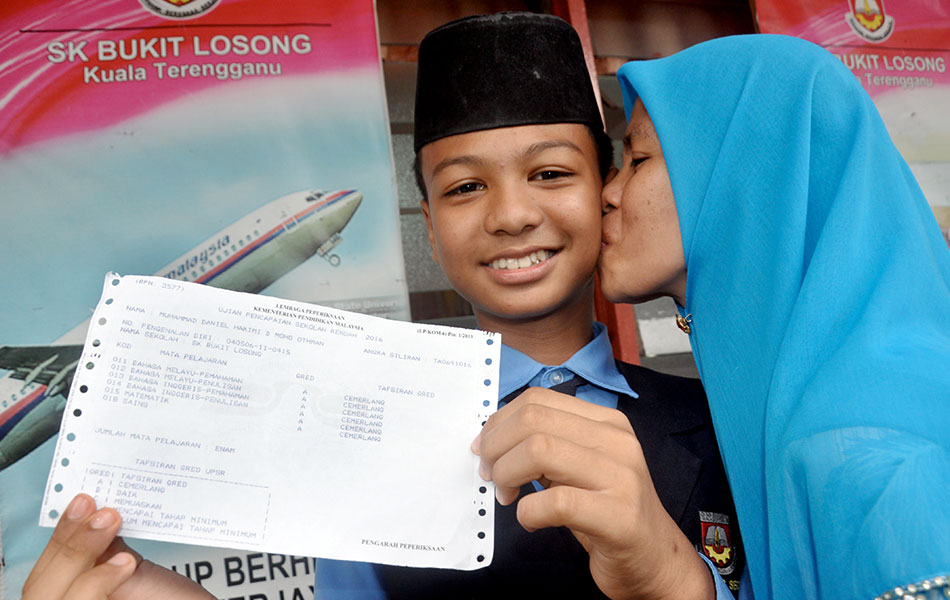 The cohort that is in the midst of sitting for SPM is after all the same PT3 (Pentaksiran Tingkatan 3) students which saw a similar disastrous pattern two years ago.

More crucial is the fact that SPM results are an extremely important assessment as these will determine the students’ next course of action.

This can take the form of a prestigious and life-changing overseas scholarship on one hand or on the other to fail to pursue tertiary education altogether where only a mere 24% succeed to do so.

Datin Noor Azimah Abdul Rahim is the Chairman of the Parent Action Group for Education Malaysia (PAGE), an educational lobbyist that serves as a channel between concerned parents, the Ministry of Education and other educational stakeholders.
#KBSR#KSSM#PMR#SPM#PT3#school exams#Year 6#Standard 6#TIMSS#PISA