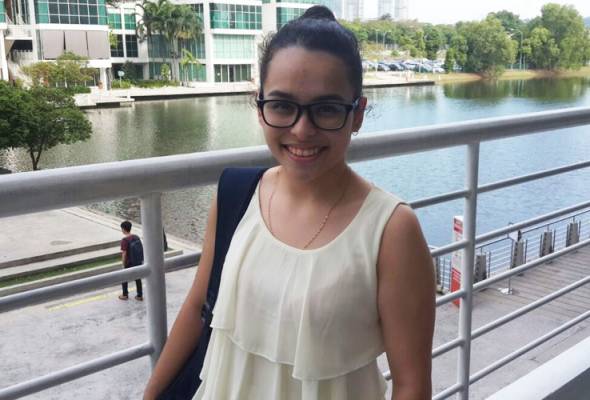 Interestingly, this 19 year-old carries the name of two countries, Malaysia and Venezuela.

They are both the respective homes of her parents, Tun Kamalul Zaman and Victoria Margarita Sanchez.

However having such a unique name, growing up was not easy for Tun Malaysia as she was often teased as a child.

"Ever since I was little, they would always tease me 'Cuti-cuti Malaysia' or 'Malaysia Boleh'. But now that I am much older, I learned to embrace what the meaning of my name means to the people of this country. I started to love my name, it is a beautiful name.

"Nowadays whenever someone teases me 'Malaysia Boleh', my response would be 'Of course, Malaysia (meaning myself) Boleh, but can you?" said the spunky teenager.

A descendant of Megat Terawis, the Chieftain of the Perak Sultanate, the story of her name came from a forlorn citizen who misses his country terribly while working overseas.

That person was her father, Tun Kamalul, an IT consultant who was stationed in Venezuela when Tun Malaysia was born.

"I was born in Venezuela. At the time, my father, who was a very patriotic man, misses his home dearly and suggested to my mother that I should be named 'Malaysia' and so my mother agreed.

"Malaysia will always be home to me. This is where I grew up ever since the age of four!"

Speaking fluent Malay, English and Spanish, Tun Malaysia is close to her traditional values and roots.

She and her sisters used to compete in Silat Gayung Fatani tournaments.

For this young lady, Malaysia is not just her name but represents a harmonious multicultural nation.

"Malaysia has united us with Sabah and Sarawak, to become a country with multicultural backgrounds. To me, Malaysia means unity, where we all come together and for a nation. Just like they always say, One Malaysia," she said.

So, what does being a Malaysian means to you?