Families of passengers and crew of Malaysian Airlines MH370 are struggling to move on three months since the airliner disappeared en route from KL to Beijing. 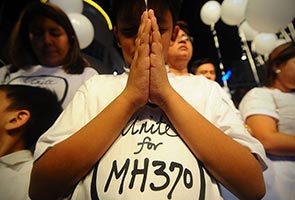 As authorities continue their search for the missing place, the world continues to #prayforMH370. - Filepic
For the loved ones of 239 people on board Malaysian Airlines (MAS) flight MH370, it has been 100 days of excruciatingly painful wait and agonising limbo.

Search operations for the missing airliner that had gone full steam – involving 26 countries at one point – is now stuck in a lull as the largest search undertaken, which covered almost 7.7.million square kilometre, has failed to yield any sign of the Boeing 777-200 aircraft.

This has left investigators no option but to head back to the drawing board as they prepare to enter a 'new' phase of search. This spells out a lot of reanalysing data and restrategising assets deployment.

But for MH370 families, it means one thing – more waiting. And as Joint Agency Coordination Centre (JACC) head Angus Houston had repeatedly warned, the search for an airplane in a vast, largely unexplored area in the Indian ocean could take up to a year, if not more.

Taking matters into their own hands

Over the past three months, the families have had mixed reactions to this tragedy. Some grieve quietly, only occasionally voicing their despair to the media, while there are others whose voices have never been heard at all.

And then there are those whose frustrations turned into anger and proactive action.

American Sarah Bajc, whose partner Philip Wood, 50, was on the flight, has been frustrated with the pace of investigations and together with some others, decided to take matters into their own hands.

Convinced that authorities are covering up the truth about MH370, she and other families from the US, Australia, France, India and New Zealand, had launched a crowd-funding campaign called 'Reward MH370', to raise US$5 million to reward whistle-blowers who come forward with information about the plane's disappearance. The "Reward MH370" campaign was launched on crowd-funding website, Indiegogo. In the video capture is French national, Ghyslain Wattrelos whose wife, Laurence, 52, and two children, Hadrien, 17 and Ambre, 14 were on MH370.

The families are convinced that the authorities are withholding crucial information and that the plane's journey did not end in the southern Indian Ocean, as pinpointed by British satellite company, Inmarsat.

"There is no credible evidence," Bajc had reportedly told USA Today, referring to the raw data released by Inmarsat, which is the only piece of information made public that linked the plane's last location to the southern corridor.

Mustering courage to move on

“What do we do when we lose someone we love, especially when it is unexpected?"

Those were the words from a teary Jacquita Gonzalez when reminiscing her husband, MH370 in-flight supervisor Patrick Francis Gomes, whom with 11 other crew members, left for Kuala Lumpur International Airport on March 8 and never returned.

"We reminisced about the past. Did we spend enough time with them? Did we express our gratitude for all the sacrifices they made for us? Did we tell our spouse just how much we loved them, not just once in a while but every single day?" she said. The crew that flew that Kuala Lumpur-Beijing route on MH370 were mostly senior staff with 15 to 34 years of service with the airline.

With them gone, families are left to support themselves as more than half of the crew were sole breadwinners.

"Terrible things happen for a reason and none of us can know for sure what they are. So we must examine and will not be passive in facing this tragedy. If this tragedy prompts reflections and debates, lets make sure it's worthy of those who have lost their loved ones," Jacquita said in a tribute for her husband and other crew members organised by the National Union of Flight Attendants (Nufam).

As the families struggle to return to their normal lives, some have chosen to do so quietly, especially the family of MAS Captain Zaharie Ahmad Shah.

The 53-year-old MH370 pilot who has been with the airline for 33 years and has more than 18,000 flying hours, was accused by certain media to be responsible for the fate of the missing plane, suggesting an act of suicide or terrorism.

"We just want to leave things the way they are, let fate take its course," said Rawanis Ahmad Shah, who had chose to keep silent at the accusations hurled towards her brother, whom she fondly calls 'Ari'.

"As far as we're concerned, there's nothing we can do," she said, adding that the family posted a video on YouTube explaining their feelings about the incident.

The video "In Memory of Captain Zaharie Ahmad Shah - The Last Farewell" described MH370 as a crisis "entangled in a web lies" and defended the captain as a dedicated pilot and loving person.

‘We just want to know what happened’

To say there has been a lot of speculation about what happened to MH370 would be an understatement.

As the search continues, so do the conspiracy theories, even more so as authorities recently concluded that the plane was not where they had been scouring for the past three months.

For Sarah, Jacquita, Rawanis and the rest of the families of MH370's passengers and crew, at this point they want just one thing – answers. The truth.