Dr Rais Hussin said there was a significant change in the findings of this study compared to the third quarter of last year.

Harits Asyraf Hasnan
President and CEO of EMIR Research, Dr Rais Hussin said there was a significant change in the findings of this study compared to the third quarter of last year. SINAR HARIAN file pic
KUALA LUMPUR:The majority of Malaysians seem to continue to live in a state of uncertainty regarding the country's economic viability and the government's ability to lead the country in the right direction.

That is the findings of the fourth quarter 2020 opinion poll involving 1,976 respondents conducted by EMIR Research in December last year.

According to its report released today, five out of every 10 respondents stated that they were unsure whether the country was on the right track, the sustainability of the economic direction as well as the ability of the Perikatan Nasional (PN) to govern the country.

Of that number, about three out of 10 respondents agreed while two out of 10 disagreed with that proposition. According to the President and CEO of EMIR Research, Dr Rais Hussin, there was a significant change in the findings of this study compared to the third quarter of last year.

"However, the percentage of respondents is almost the same as the previous quarterly survey where 39 per cent admitted positively about the changes in their lives and 53 per cent are optimistic about their future," he said in the report.

The report explained that in the fourth quarter of 2020, 19 per cent of respondents disagreed with the statement that the future of the country was on track, compared to only eight per cent in the previous quarter, a difference of more than 10 per cent.

In fact, 27 per cent of respondents do not agree that the country's economy is strong, compared to only 16 per cent who disagreed in the third quarter of 2020.

The same trend is also related to the ability of the PN government to govern the country that saw 19 per cent disagreeing compared to only 9 per cent who disagreed in the third quarter of 2020. 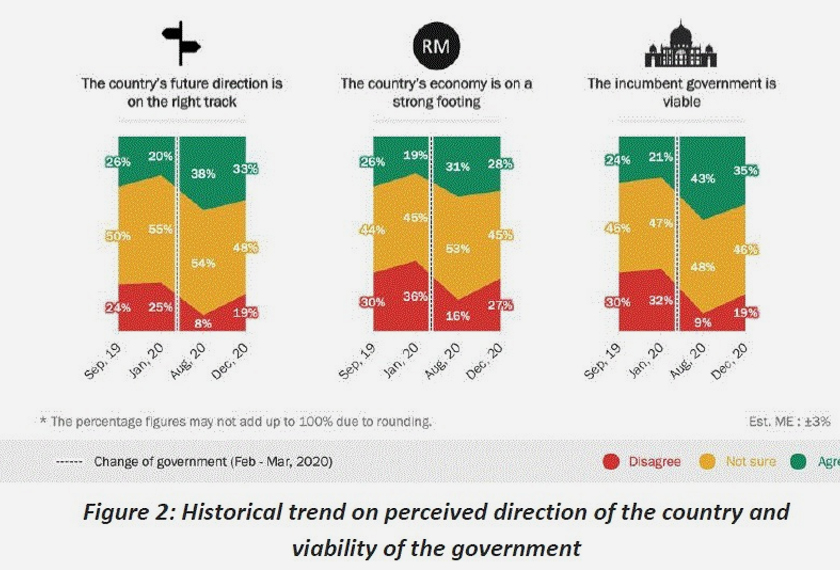 Dr Rais explained that the survey did not take into account the events that took place during last January.

Among them were the rejection of the registration of political parties, Parti Pejuang Tanah Air (Pejuang) and Malaysian United Democratic Alliance (MUDA), the change of Barisan Nasional secretary-general and the proclamation of emergency.
#Rais Hussin#Perikatan Nasional#Pejuang#Barisan Nasional#Malaysia#muda